Nothing says Christmas quite like a festive light switch on!

Organised by the Clatterbridge Cancer Charity, on Monday 9th December our brand new hospital in Liverpool was illuminated green with Christmas lights.

Cancer nurse Amy Cookson, who is herself a cancer survivor, and her daughter Ava, were asked to ‘push the button’ at the building site of the Clatterbridge Cancer Centre in Liverpool, which is set to open in May 2020. 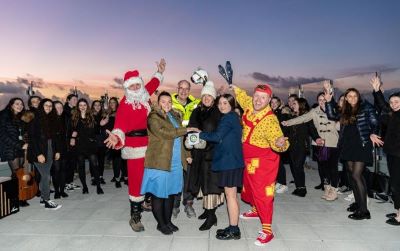 Amy was diagnosed with Hodgkin Lymphoma in 2013 and was treated by the team at The Clatterbridge Cancer Centre. So inspired by the amazing care she received, once recovered, Amy made the decision to become a nurse herself and now works on the same ward she was treated on six years ago.

Amy was joined by Santa and one of the stars of this year’s magical pantomime, Snow White, at the M&S Bank Arena – Bippo who plays Muddles. While vocal group The Luminelles from Birkenhead High School Academy sang – quite literally - from the rooftops, with Christmas classics from the terrace of the new hospital.

“I would like to thank Amy and her daughter Ava for officially switching on the lights, along with everyone who has contributed to creating such a special moment. Thanks go to our builders Laing O’Rourke too who have arranged for the Christmas lights to be added, the new hospital looks wonderfully festive.”

Head of Charity, Katrina Bury said: “Christmas is such an important time for the Charity and with £5m left to raise for our New Cancer Hospital Appeal, there’s never been a more important time for people to help us. It’s only through charity donations, that we can build the best hospital possible, one that we believe the people in our area need and deserve.”